2019 September 27th. ,Günter Nooke, the Chancellor’s personal Africa representative and founder of ident.africa Fred-Eric Essam travelled to Boboyo, Cameroon. There Nooke visited together with the German Ambassador, Dr. Hans-Dieter Stell, the development and community projects initiated by the association ident.africa since more than 15 years in the region Extreme-North of Cameroon. 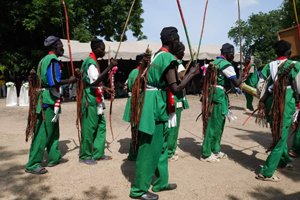 The delegation arrived in Boboyo around noon and was warmly welcomed by the population with traditional local music. The obligatory singing of the national anthem of Cameroon followed. After the welcome speeches of the chairman of the village committee, Mr. Banga René followed by His Majesty Kazi Maina, the traditional authority (Lamido) of Boboyo, Nooke expressed his gratitude for the friendly reception. He said: “I’m visiting Cameroon for the fifth time, but my first time in Boboyo…when I became the Chancellor’s personal representative for Africa, the first person to approach me was Eric Essam and ident.africa, so I know Boboyo from the beginning and I always wanted to come here.” Nooke was glad to hear that what the development cooperation is doing in the village is well perceived and called on the population to be active in the village by taking over tasks they can do themselves in order to make progress in the village.

German Ambassador Dr. Hans-Dieter Stell insisted in his spontaneous speech to the population, especially to the village elders, to urge them to take their future and that of the community in this fantastic country into their own hands. The ambassador continued: “Please also think about the young girls. Girls’ education is an essential key to sustainable development. Cameroon is a great country, you are a great people”. The main highlight of the trip was definitely the visit to the preschool. Since the official opening of the pre-school “Ecole Maternelle von Boboyo” in August 2015, more than 300 pupils have already been enrolled. A school director appointed by the local education authority and three (3) assistant teachers financed by ident.africa ensure that teaching and non-school activities run perfectly. Nooke accepted the patronage for the project in 2011. For him, one thing was already clear at the time: “The fascinating thing about this project is the combination of tradition and modernity. Students from the University of Maroua in Cameroon share their knowledge of local architecture with German students from RWTH Aachen University, who in turn share their expertise in modern architecture,” says Nooke, federal chancelor’s Personal Africa Representative. “An innovative, sustainable concept is thus being used to create a pre-school for the early childhood education of approximately 100 girls and boys.” He commented.

People in Boboyo are illiterate. It has been a big step towards empowerment for them since the opening of the pre-school. That is why women and men in the village work every day for a better future for their own children. In order to support the pupils further, school desks for Boboyo schools, school materials and sports equipment were handed over to the best pupils and also some goats to particularly active women of the village. Later in the afternoon, the delegation visited a biogas plant that had been in service since 2016. A total of ten (10) plants were financed by the small budget program of the German Embassy in Cameroon. Afterwards the tour continued to the sewing station of the village. This sewing station is Boboyo’s qualification centre with a special focus on women. With this project ident.africa e.V. supports the initiative of 60 young women who want to start their own business after an intensive training in the textile field. They will then be able to lead their own lives in the future in order to engage in their own activities and improve their own life situations. Later in the afternoon the delegation left.