Fred-Eric Essam’s Partner in Cameroon is Nadège Aboudi Meyong. She could earn within two (2) weeks 122.000 CFA, (200 euros) most recently thanks to the WIDU project. A unique opportunity for Nadège to start a sustainable business and thereby be able to get out of poverty. The sale of uniforms in preparation for International Women’s Day on March 8, gave her the lofty opportunity to illustrate her business potential. A great achievement for the 32 years old mother of 3 Children in a country where up to 70% rural women have less Access to education, Jobs or income. 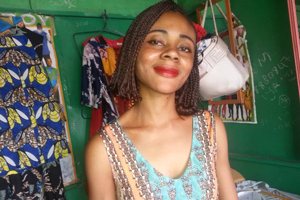 Her husband separated from her a year ago. Since then, Nadège has become responsible for her self and her own future. After the primary school, she couldn’t continue in high school. Her parents couldn’t afford to pay the school fees. This is why she started learning sewing at a very young age from a woman not far from her mother’s home. Aboudi Meyong Justine is a very modest woman. What is most important to her today is to offer her children a future. She wants to become a professional stylist and then invest the money she would earn in the education of her children. For this reason, and despite the daily difficulties, she works hard, day and night in a friend’s sewing Box in Efoulan neighbourhood in Yaoundé, the capital of Cameroon. 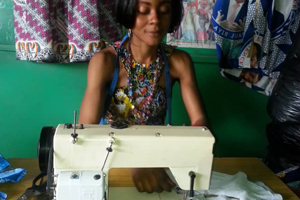 Fred-Eric Essam met Nadége Aboudi for the first time during one of his stays in Cameroon. Sitting behind an old pedal sewing machine, on which stacked fabrics and other sewing equipment such as scissors, threads, etc. could be seen, Aboudi was working in a container as a sewing studio situated on the side of the street towards the town council of Efoulan.  Her husband had bought this box for her five years ago. Inside the container there were also some shelves that were more or less full and some plastic balls or other bags filled with textiles and clothes that clients had given Aboudi for sewing and finishing. In addition, she had been able to start another small business, selling sweetened drinks to people passing by. Thus, this additional income also helped her to meet her expenses, such as rent, electricity and mobile phone costs. 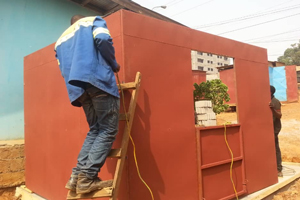 A couple of minutes later, Essam told her that he was supporting women’s projects, especially in the field of sewing. Nadege then argued: “I don’t want help, I’m looking for a loan or an investment that would allow me to start my own business and also give hope to other girls who can work and don’t have the means to do so.” Essam explained that, this exactly is where the WIDU project comes in. “The widu.africa platform, available since the end of 2019 as a concrete solution for the promotion and financing of micro and small enterprises in Africa, was launched on the initiative of the German Federal Ministry for Economic Cooperation and Development (BMZ) and the Deutsche Gesellschaft für Internationale Zusammenarbeit GmbH (GIZ).” 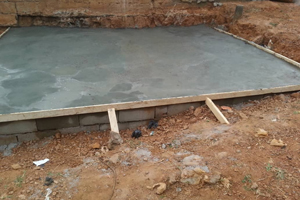 Additionally an in particular, “its aim is to promote the creation of sustainable jobs by “promoting activities in the so-called “informal sector” in Africa through the use of remittances from the diaspora”. For Nadège it is a lucky coincidence, as Fred-Eric Essam would be her “Diaspora” sponsor. Part of the investment at WIDU is financed by public funding from the BMZ (German government). In concrete words, the contributions are made available to Nadège at a ratio of 50% from the BMZ in the amount of EUR 2,200 and 50% as a joint contribution by Eric Essam from the diaspora and Nadège at local level. The total cost of the project will thus amount to 4,400 euros. 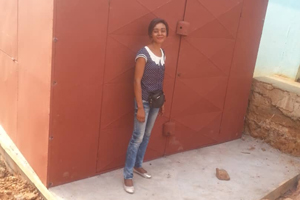 As entrepreneur in the informal sector, Nadège says: “I need capital to expand my business and establish my own sewing shop in Yaoundé”. She added then: “With this money, I can buy several sewing machines to make children’s and women’s clothes from “pagnes”, the colourful African textiles. I also want to invest my income in an even more professional sewing machine. Also an iron, a table with chairs and other materials and the production of my own container (kiosque) in which I can work. I also plan to expand during the year and offer work to other girls in the neighbourhood. I plan to hire four more girls who will help me earn more money and give these girls work in the sewing kiosque”.
Looking back Fred-Eric then were indeed thinking maybe one day, with more determination, Aboudi Nadège will be able to achieve her main goal. “To become a professional tailor, maybe even a real fashion designer.” But in the begining, Nadège used diaspora money and her own financial shares to set up a new kiosque as a sewing studio. Fortunately, 10 days before March 8th, everything was ready, a great opportunity to sell to her customers and earn the amount of 122.000 f cfa prior to the International Women’s Day. Let’s wait and see!