08.04.2019, the trip to Monschau took about one hour. On the parking lot of the “Bischöfliche Mädchenrealschule St. Ursula Monschau”, Mrs. Johanna Landerer, the teacher was already waiting. She and Mr. Fred-Eric Essam had met last spring. The friendship resulted in a joint project idea to support the women’s and self-employment project in Boboyo through various charitable activities. Mrs. Landerer then donated seven (7) sewing machines. Now Essam visited the Realschule on that day, where more than 80 pupils were already curiously waiting for his presentation. 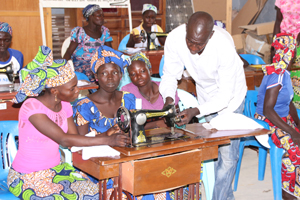 At 09:30 it began with the first group of pupils. 40 girls followed the presentation on the topic “The future of the girls in Boboyo-Kamerun is education”, documented with pictures and a PowerPoint presentation – A broad excursus about the country, the people, the culture. Especially the fascinating landscape and the diversity of the animal fauna inspired a great interest to travel the country later on.

Especially with the topics of endemic corruption in the country and the widespread poverty among the population, the schoolgirls were very touched! The country of Cameroon, located in Central Africa, with access to the Atlantic Ocean and abundant rainfall in the south, has the best climatic conditions to feed its 23 million inhabitants safely, e.g. through agriculture. Unfortunately, corruption destroys all economic structures and constantly degrades people’s living conditions. 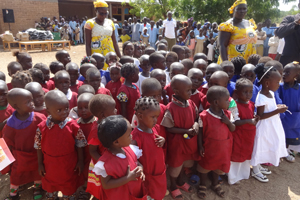 When it came to the main topic of the lecture, Essam presented a still very gloomy picture of the girls in the country. They are often victims of poverty, violence, discrimination, and rarely going to school in some places, especially in the villages. In some regions they are already married at the age of 15. In North Cameroon , two-thirds (2/3) of the girls do not reach the university entrance examination, they often live in the polygamy and have to go to get water for kilometers.

When the topic of breast ironing, circumcision (genital mutilation) came up, the very lively meeting, accompanied by great interest and questions from the the girls’ school of the eighth classes in Monschau, was quiet. The faces of the pupils showed their consternation, anger and stupefaction. When asked why this practice continues today, it became clear that only education is the solution. Essam then explained that ident.africa had set itself the strategic goal of increasing the educational opportunities of the girls in Boboyo, significantly increasing the educational and qualification opportunities, promoting self-employment, giving girls a voice, strengthening the self-determination of women, hiring auxiliary teachers. “This is the only way we can jointly improve the living conditions of the girls in a sustainable way. So Fred-Eric Essam at the end of his presentation.

With the second group of pupils led by Ketrin Osmani, the pupils at their school of the Bischöfliche Mädchenrealschule St. Ursula Monschau want to start a fundraising campaign, to earn the money from which they would like to donate to the children from Boboyo/Cameroon. Because helping can be so easy, they thought. Specifically, they would start a campaign to sale cakes at the next school party, the revenues that would go to ident.africa e.V.. So they could contribute with a small donation to the fact that the educational chances as well as qualification chances of the girls could be improved. “Education is key!

With a team photo with teacher Mrs. Landerer, Fred-Eric Essam, said goodbye to the excited pupils.