It was not a round birthday for Jo Ruoff, Professor of Building Physics at the University of Applied Sciences in Koblenz, but it was still reason enough to collect donations for ident.africa’s educational project instead of gifts. In this way he supports the efforts of the Cologne-based association for education, health and infrastructure projects in the small village of Boboyo in the North Cameroon region.

Since its foundation in 2004, the association has achieved remarkable success. The association has distributed books and school furniture to schools, constructed a health station, solar panels, drinking water wells and even a built a pre-school for 100 children in 2014. With its most recent project for the empowerment of women, the association has initiated a project to promote young women in particular through empowerment and self-employment. For Fred-Eric Essam, founder and chairman of the association, ” a specific assistance of young women is a concrete answer to the question of migration. With the 600 Euro donation, for example, three (3) sewing machines will be acquired”. 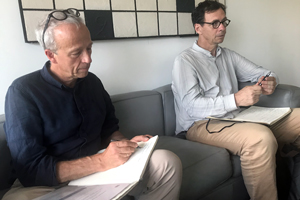 Prof. Jo Ruof has visited the Ghana and Cameroon, two African countries several times in recent years. In November 2010 he travelled to Cameroon as part of a university cooperation project and as a representative of the teaching and research section of the Faculty of Architecture at the RWTH Aachen in order to meet students and professors from the University of Maroua, Region Extreme-North. On site, the two universities developed concepts for cooperation and promoted the exchange of students at both universities on an academic level.
In February 2017 as professor at the Koblenz university of applied sciences and he was member of the expert jury for the so called architecture contest “A Church for Boboyo”. Prof. Dipl.-Ing. Jo Ruoff, Professor of Building Physics at the Koblenz University of Applied Sciences, assessed the concepts submitted by the students. The object of the architectural contest was a design that would serve as the basis for the realization of a church in Boboyo as a spiritual center.